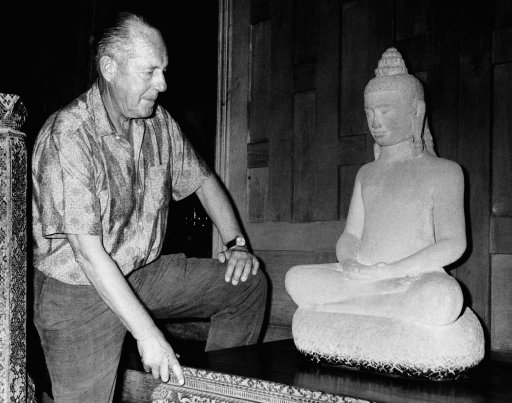 FILE - In this November, 1966 file photo, American businessman Jim Thompson examines a statue in Bangkok, Thailand. It's the cloak and dagger stuff, rather than the glitz and glamor, that's the focus of a recent book "The Ideal Man: The Tragedy of Jim Thompson and the American Way of War" by Joshua Kurlantzick, an author on Asian affairs with the New York-based Council on Foreign Relations. (AP Photo) 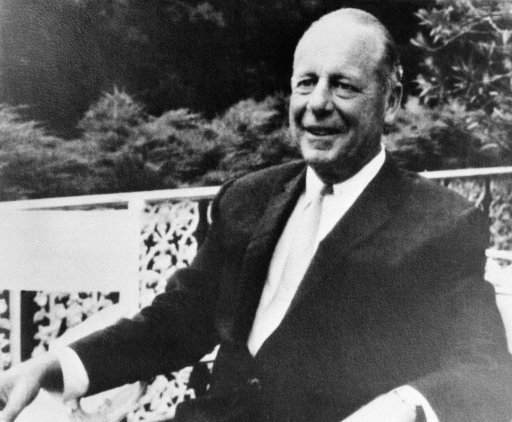 FILE - In this undated file photo, Jim Thompson smiles shortly before he disappeared. Thompson mysteriously disappeared while going for a walk on Easter Sunday, March 26, 1967 in the Cameron Highlands of Malaysia. It's the cloak and dagger stuff, rather than the glitz and glamor, that's the focus of a recent book "The Ideal Man: The Tragedy of Jim Thompson and the American Way of War" by Joshua Kurlantzick, an author on Asian affairs with the New York-based Council on Foreign Relations. (AP Photo/File)

BANGKOK (AP) — Forty-five years after vanishing into a jungle without a trace, "Silk King" Jim Thompson remains a daily presence in Thailand: Shoppers crowd his elegant stores and the American expatriate's antique-rich residence is one of the capital's top tourist attractions.

Credited with the revival of a now booming silk industry, Thompson attained legendary status, enhanced by a bon vivant lifestyle at a time when Thailand was still truly exotic — and by his mysterious death. But little has been known about Thompson's intensely political, darker side — his freelance backing of Asia's insurgencies, clashes with Washington's Cold War warriors and his connections to the U.S. Central Intelligence Agency, which to this day reportedly refuses to release his complete file.

It's the cloak and dagger stuff, rather than the glitz and glamor, that's the focus of "The Ideal Man: The Tragedy of Jim Thompson and the American Way of War" by Joshua Kurlantzick, an author on Asian affairs with the New York-based Council on Foreign Relations.

The book provides no new clues about Thompson's vacation walk into a Malaysian jungle in 1967 from which he never returned. Numerous theories range from his having been eaten by a tiger to abduction by U.S. intelligence agents.

But Kurlantzick says he uncovered a trove of other information from the Federal Bureau of Investigation, departments of Defense and State and other U.S. government agencies through the Freedom of Information Act as well as unclassified material available, but mostly untapped, in the National Archives.

From this, emerges a portrait of Thompson as a U.S Army officer in the Office of Strategic Services, forerunner of the CIA, who stood ardently behind America's immediate post-World War II policy of championing democracy and ridding the world of colonialism. He believed Vietnam's Ho Chi Minh was a nationalist who should be supported, and almost worshipped Pridi Banomyong, Thailand's pro-democracy statesman.

But Washington executed an about-turn and began to back assorted Asian strongmen and the French in colonial Indochina — "a scurvy race" he called them — on grounds that it was fighting the greater menace of Communism. Thompson became disillusioned and angry.

He was devastated when Pridi was ousted in a coup followed by the killings of many of his followers and a succession of thuggish leaders from the military, which remains a powerful force in Thai politics to this day.
"I wanted to use Jim to broaden the story to Thailand's relations with the United States, and to explore this whole generation of those who had come out of the OSS in World War II and then were pushed out by the Cold War," Kurlantzick said in an interview.

Scion of a wealthy East Coast establishment family, educated at Princeton University, James H. W. Thompson dabbled in architecture and partied in New York before volunteering for the army. A wartime marriage ended in divorce. Serving with distinction in North Africa and Europe, he was about to parachute into Thailand with an OSS team when the war ended.

In Thailand, Thompson became deeply involved with Lao, Cambodian and Vietnamese insurgents who used the country as a base in fighting the French, helping to supply weapons and serving as a go-between, often acting without approval from headquarters. Although discharged in 1946, Thompson continued to "serve as a de facto intelligence officer," Kurlantzick says, one useful to all sides until the radical shift in U.S. policy when he and other colleagues in the OSS found themselves on the "wrong side."

"Jim was an idealist, a romantic, an anti-imperialist and there was no more idealistic time than just after the war," the book quotes a one-time U.S. diplomat, Rolland Bushier, as saying.

America's secret entry into the war in Laos in the early 1960s finally destroyed his vision of "an America that used its power to build democracy in the region, that could distinguish between local grievances and global communism, and that inspired Asians as a liberator, not as a new colonizer."

Like a number of like-minded Americans at the time, Thompson was investigated by the FBI for suspected "un-American activities," and "although Thompson once had been extremely valuable to U.S. intelligence, the agency finally put out a 'burn notice,' on him, warning all employees to stay away from him," the book notes.

By this time, he had started The Thai Silk Company, reviving a largely moribund industry, helping thousands of poor villagers in the process and introducing Thai silk to the world. Dinners at his traditional Thai home, filled with antiques he had collected, became a must-do for visiting celebrities, diplomats, spies and journalists, many of whom described them, and Thompson's personality, as unforgettable.

A number of those who knew him personally have recalled a more optimistic, upbeat individual than portrayed in the book, and almost certainly it isn't his politics which is now remembered by most.

"Jim may have disappeared decades ago but he remains alive today through the legacy of his great silk products, the help his company still gives poor rural folk and through the preservation of Thailand's rich artistic heritage," says William J. Klausner, president of The James H. W. Thompson Foundation, which serves as caretaker of his residence-museum and promotes Thai culture.

Kurlantzick says Thompson was a "multifaceted, generous and foresighted man, but he was in some ways too idealistic, bordering on the naive and it became his downfall in many ways."

Toward the end, aged 61, Thompson felt the hopes of his generation had been dashed, the old Asia he loved was fast becoming too Westernized, and the most passionate love affair of his life, with the wife of an American diplomat, had ended. Like other expatriates, he could never go home again, and yet sensed that he would never become truly Thai. 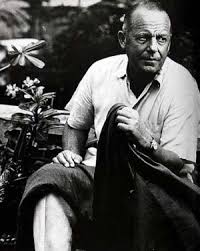