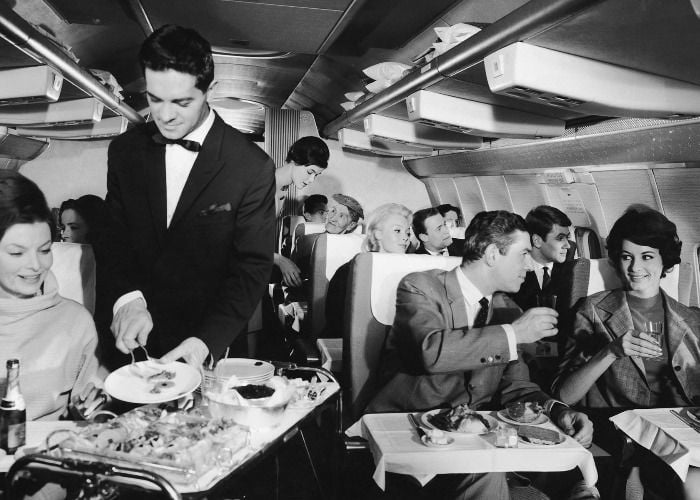 If you’ve travelled on a Thai domestic flight recently you’ll know that it’s been a relatively boring experience. One the safety demo is over, that’s the last you see of the flight attendants as they head to the back of the plane and chat – there’s been nothing else for them to do because of the ban on food and in-flight services.

Now the Thai Civil Aviation Authority of Thailand has lifted the ban on food and drinks services on domestic flights. In its latest announcement director-general Chula Sukmanop says that its ban on the sale of souvenirs has also been removed (actually The Thaiger had seen the sale of souvenirs and merchandise over the past 2 weeks).

“But airlines must continue to follow the health and safety regulations issued by relevant authorities.”

Commercial flights were suspended during April due to the escalating outbreak of Covid-19 in Thailand. The Aviation Authority then allowed domestic flights to resume on May 1, although airlines were barred from serving food and drinks on board for flights that did not exceed 2 hours, just about every flight in Thailand.

Even with the lifting of its food and drink ban, the Aviation Authority insists passengers are still required to wear masks during flights and airlines must install additional precautions for the serving of foods.

On August 12, the CAAT announced that the ban on international commercial flights will remain in force as the Covid-19 pandemic is “still at critical and dangerous levels globally”.

“This is an indefinite ban and that the Centre for Covid-19 Situation Administration is monitoring the situation before it decides when flights will resume.”

Meanwhile, Cash-strapped low cost airline AirAsia said on Tuesday it would begin charging customers a fee to check in at airport counters. The fee is in part to encourage customers to minimise physical contact with staff during the coronavirus pandemic although the Thai franchise, Thai Air Asia, has not announced that it will take up the new charge of its Malaysian parent.

AirAsia last month reported the biggest quarterly loss in its history due to the devastating impact the pandemic has had on travel demand, with revenue down 96%. The airline said it had applied for bank loans in its operating markets and had been presented with proposals from investment bankers, lenders and potential investors to raise capital.


Its management analysis, presented to the Stock Exchange of Thailand last week, blamed the loss on the ongoing Covid-19 pandemic that has impacted on global demand for air transportation. But the local shutdown from March to May 2020 resulting in the suspension of international flights continue to disrupt the airline’s performance. The airline is left with just domestic services. NokScoot, the international offshoot, ceased operation and closed down in June.