Myanmar reported 70 new coronavirus infections on Wednesday, the highest one-day tally since the virus was first detected in the country on March 23, according to the Ministry of Health and Sports.

There had been no local transmissions between July 16 and Aug 16, with about 200 infections detected since then. The majority of cases are residents of Sittwe, the capital of Rakhine State, and 75% of them are asymptomatic, according to the Ministry. With the latest cases, the Southeast Asian nation’s total count reached 574.

“We have noticed the rate of infections in Rakhine State has risen quickly and expect to see many more cases in the coming two weeks,” Khin Khin Gyi, director of emerging infectious disease at the Health Ministry, said in a phone interview on Wednesday.

Sittwe is along the Bay of Bengal, in the western part of Myanmar and south of Bangladesh. It has a large population of the Rohingya Muslim minority.

“Rakhine State has become the hotspot for infections so we assume
the new variant of Covid-19 named D614G is spreading there,
originating from a market,” Khin Khin Gyi said.

The official warned, citing epidemiological findings in other countries, that the new strain “could spread 10 times faster”, so the government will tighten entries and exits from Rakhine State. The government will also send in more medical workers and volunteers, strengthen capacity of hospitals and step up contract tracing and testing in public hospitals and laboratories.


About 13,000 doctors and thousands of nurses stand ready at over 1,300 public hospitals across Myanmar to provide treatment in the event of a spike in cases, Khin Khin Gyi said. Business capital Yangon, Myawaddy and Rakhine State are considered “risky areas”, she said.

Myanmar has a population of about 54 million, and has borders with Thailand, China, India, Bangladesh and Laos.


BANGKOK (AP) — Two soldiers who deserted from Myanmar’s army have testified on video that they were instructed by commanding officers to “shoot all that you see and that you hear” in villages where minority Rohingya Muslims lived, a human rights group said Tuesday.

The comments appear to be the first public confession by soldiers of involvement in army-directed massacres, rape and other crimes against Rohingya in the Buddhist-majority country, and the group Fortify Rights suggested they could provide important evidence for an ongoing investigation by the International Criminal Court.

More than 700,000 Rohingya have fled Myanmar to neighboring Bangladesh since August 2017 to escape what Myanmar’s military called a clearance campaign following an attack by a Rohingya insurgent group in Rakhine state. Myanmar’s government has denied accusations that security forces committed mass rapes and killings and burned thousands of homes.

Fortify Rights, which focuses on Myanmar, said the two army privates fled the country last month and are believed to be in the custody of the International Criminal Court in the Netherlands, which is examining the violence against the Rohingya.


According to Fortify Rights, privates Myo Win Tun, 33, and Zaw Naing Tun, 30, who served in separate light infantry battalions, gave “the names and ranks of 19 direct perpetrators from the Myanmar army, including themselves, as well as six senior commanders … they claim ordered or contributed to atrocity crimes against Rohingya.”

The videos were filmed in July while the soldiers were in the custody of the Arakan Army, an ethnic guerrilla group in Rakhine engaged in an armed conflict with the government, and included subtitled translations into English, the human rights group said. They were posted on Fortify Rights’ page on a video-sharing site, where the Associated Press viewed them.

The AP was not able to independently corroborate the soldiers’ accounts or ascertain whether they made their statements under duress.

However, U.N. agencies and human rights organizations have extensively documented atrocities carried out against the Rohingya by Myanmar security forces. The International Court of Justice agreed last year to consider a case alleging that Myanmar committed genocide against the group. The court’s proceedings are likely to continue for years. 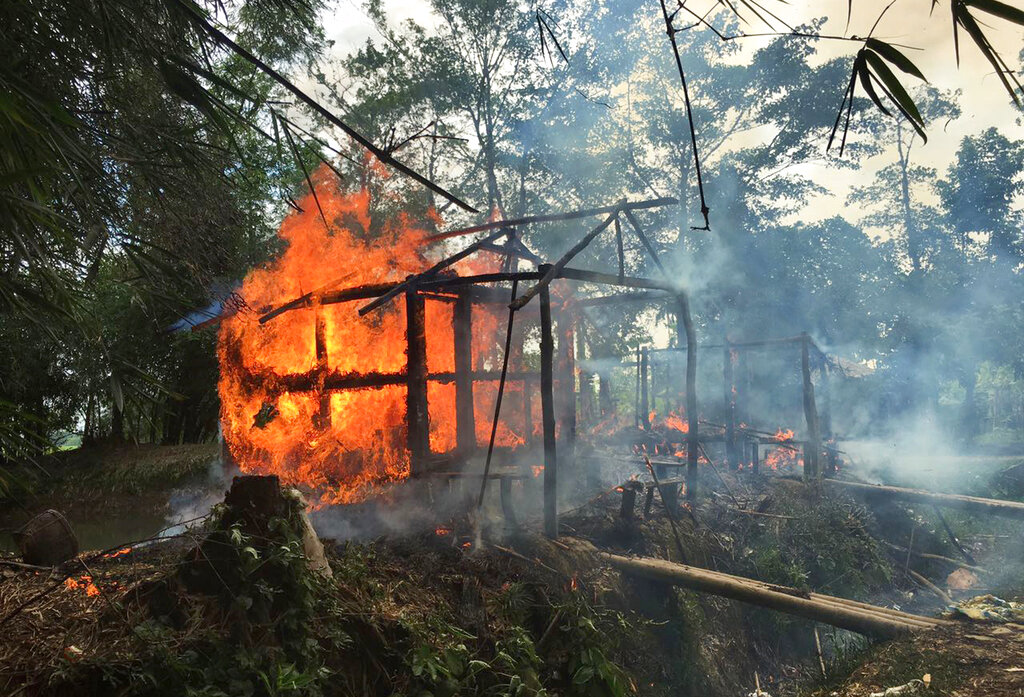 In this Sept. 7, 2017, file photo, houses are on fire in Gawdu Zara village, northern Rakhine state, Myanmar. Two soldiers who defected from Myanmar’s army and confessed on video to taking part in massacres, rape, and other crimes against the Muslim Rohingya minority are believed to be in the custody of the International Criminal Court in the Netherlands and should be prosecuted to obtain their evidence, a human rights organization said Tuesday. Photo: AP
Myanmar has long considered Rohingya Muslims to have migrated illegally from Bangladesh, even though their families have lived in Myanmar for generations. Nearly all have been denied citizenship since 1982, effectively rendering them stateless. They are also denied freedom of movement and other basic rights.

In separate videos, the two soldiers were shown seated stiffly in military uniforms with a sheet covering the background, as an off-screen male voice asked them questions. The details in the questions, as well as the ready answers about events that occurred about three years earlier, made it evident the content was prepared, if not actually rehearsed. However, the violent acts the men described echoed the vast number of accounts of atrocities collected by U.N. investigators and independent human rights workers from Rohingya refugees in Bangladesh.

After answering questions about his name, serial number and military units, Myo Win Tun said the commander of the 15th Military Operations Center, whom he named as Col. Than Htike, gave an order to “shoot all you see and all you hear” when raiding Muslim villages. He said in one operation, they killed and buried 30 people: “eight women, seven children and 15 men and elderly.”

He asserted that Col Than Htike ordered his unit to “exterminate all Kalar” — a derogatory name for the Rohingya — and that they shot the men in their foreheads and kicked their bodies into a hole. They also raped the women before killing them and he admitted to carrying out one rape.

He said his unit appropriated mobile phones and laptops, and also seized cattle, an allegation that has been widely reported.

Staring directly at the camera with barely any perceptible movement, Zaw Naing Tun recounted how his unit “wiped out” 20 Rohingya villages.

The soldier said about 80 people in all were killed, including children, adults and the elderly of both sexes. The killings were sanctioned by his battalion commander, Lt. Col Myo Myint Aung, he said.

In one incident, 10 villagers suspected of belonging to the Arakan Rohingya Salvation Army, the Rohingya insurgent group, were captured and tied up, and then shot on the orders of a captain, he said, acknowledging that he was one of the shooters.

Zaw Naing Tun said he was present when a sergeant and a corporal raped three Rohingya women in the course of searching houses, but asserted he did not carry out any rapes.

He acknowledged taking part in looting, saying his unit officer declared “what you take is what you get” ahead of a raid on a market.

“We entered into the market, destroyed locks and doors, and then we took money, gold, clothes, food and mobile phones,” he said.

Fortify Rights said the two deserters arrived at Myanmar’s border with Bangladesh in mid-August and asked Bangladesh authorities for protection. Bangladesh officials then notified the International Criminal Court about their presence, and said they are no longer in Bangladesh, according to Fortify Rights.

Asked about the two soldiers Tuesday, the ICC’s Office of the Prosecutor said it does not comment on its ongoing investigations, adding in a statement that it has been “independently and impartially collecting evidence from a variety of sources regarding the alleged atrocity crimes.”

“These confessions demonstrate what we’ve long known, which is that the Myanmar army is a well-functioning national army operating with a specific and centralized command structure,” Fortify Rights chief Matthew Smith said in a statement. “Commanders control, direct, and order their subordinates in all they do. In this case, commanders ordered foot soldiers to commit genocidal acts and exterminate Rohingya, and that’s exactly what they did.”

Under the legal doctrine of command responsibility, higher-ranking officers are held responsible for heinous acts carried out by those serving under them. 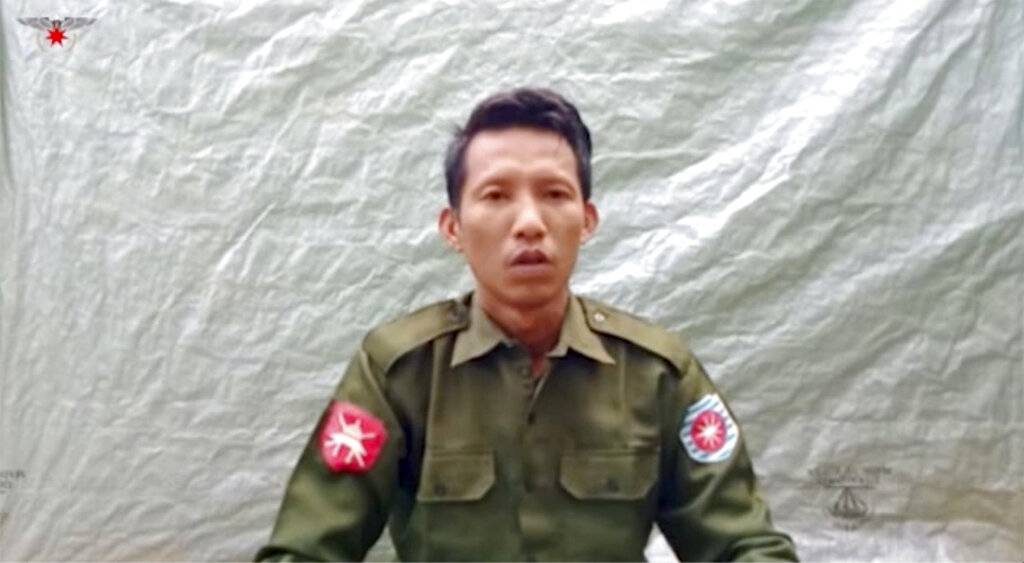 In this image taken from video provided by the Arakan Army, Private Myo Win Tun provides a video testimony from an undisclosed location somewhere in Myanmar on July 23, 2020. Photo: Arakan Army via AP
That the two men described similar atrocities in separate areas also “may indicate operational consistency between battalions, coordination, and intent to commit genocide,” Fortify Rights said.

It said the video confessions appeared to be credible because their content was consistent with other evidence previously unearthed by the group and other investigators, such as the U.N.-empowered Independent International Fact-Finding Mission on Myanmar.

Fortify Rights urged that the two former soldiers be tried by the ICC and that the court put them in a witness protection program.

“It is reasonable to assume Myo Win Tun and Zaw Naing Tun could plead guilty to the crimes to which they confessed in exchange for becoming ‘insider witnesses’ for future trials. Such a development would significantly advance efforts to hold perpetrators accountable for atrocity crimes against Rohingya,” the group said.

The International Court of Justice is the U.N.’s top court. It settles disputes between nations and does not prosecute individuals. The International Criminal Court, which seeks to hold individuals responsible for crimes, has not issued any public indictments in the investigation it is conducting. Both courts are based in The Hague in the Netherlands.