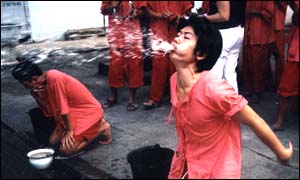 By Olenka Frenkiel
Reporting from Thailand


The 2,000-mile Thai-Burmese border is an open sore of drug trafficking. "Yaa baa" - an innocuous looking pink pill - has created almost a million new teenage addicts within five years. Crossing Continents' Olenka Frenkiel joins an army team tracking the traffickers.
Dam, 12, is undergoing art therapy for drug addicts at the Thanyarak Hospital, a rehabilitation centre on the outskirts of Bangkok.

The vast majority of patients are teenagers addicted to "yaa baa" - tiny pink pills that look like sweets and smell of chocolate or vanilla - appealing to young tastes.

But they are a form of speed, a methamphetamine, and are said to contain ephedrine, formaldehyde, caffeine and a variety of addictive agents and poisons, from heroine to cyanide. 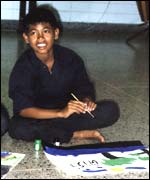 "I tried inhaling yaa baa with friends before school. Then I came home. I didn't go to school. I just wanted to play."

"I began hallucinating," says Dam. "I saw people walking past me when there wasn't anybody. I was so frightened my legs were shaking. I didn't know if they were ghosts or real."

In some cases the paranoia becomes too much and addicts jump off buildings and doctors have discovered evidence of irreversible brain damage.

The Phra Muang Task force, a special unit of the Thai army, guards the mountainous 2,000-mile border with Burma.

This drug is a serious threat to Thailand's national security.

They say they have arrested 7,000 dealers and seized 28 million yaa baa tablets. 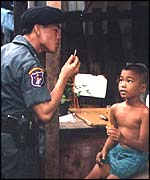 
Most comes from the Wa State, an ethnic enclave inside Burma.

For years the Wa people, originally from China, were rebels against the Burmese regime. But peace now prevails.

The Burmese military regime has granted them some autonomy but only, it is believed, for a cut in the yaa baa profits in return.

Thai Lt Colonel Piranei and his team bring me to a look-out post from where we can see right into the Wa State.

He points to a sun-bathed valley with a sprawling metropolis, Mungyawng, 20 miles across the border. 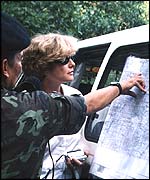 Two thousand miles of border to patrol is a huge task


"There are five yaa baa factories in this area. They have one big factory in the valley behind that mountain."

He passes me the binoculars.

"We believe drugs money built the city. We can clearly see a big hospital, an army camp, a hydro-electric dam and we know there's a big casino and hotel."

The task force has set up a little display of the drugs confiscated along this border.

The colonel opens a pack. I can smell the chocolate. 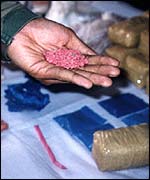 
"In every pack of 200 pink pills, the Wa include two little green ones - the green are double strength, a bonus, for the dealer", he explained.

The Thai army is also said to be involved in the illicit drug trade but the colonel denied this was true of him or his men.

I met two Yaa baa couriers from the Wa State. They looked Chinese and were in their early 20s.

"At home I was told never to use it", says the smaller of the two, named Tung.

"Yaa baa is not for us to use. My parents would be very angry if I took it."

How ironic - these little pills have transformed this band of rebels, this penniless economy, into a prosperous self-contained mini-state.

Every child is educated. Their lethal little pharmaceutical laboratories have built them a power base in this obscure jungle crossroads of the world.

I asked Tung whether the Wa people ever considered the anguish the drug had caused.

He answered, much like the global tobacco industry might: "No-one forces people to take the drug. Some do, some don't. It is their decision."
Neues Thema erstellen Antworten
Thema: