Die Schere zwischen Arm und Rech in Thailand:
0,1% besitzt 46,5% der Gesamtvermögen des Landes!
NESDB study reveals massive wealth inequality; 15.6 million deemed 'poor'
CLOSE TO one in four Thais (23.5 per cent) - 15.6 million people - are considered to live in poverty, while a fraction of the population (0.1 per cent) is so rich they own nearly half (46.5 per cent) of the country's total assets, a 2012 study by the National Economics and Social Development Board found.
Wealthy Thais, in the top 20 per cent, possessed 326 times more land than the poor, while their salaries were 25 higher than the poor, the study found.
The rich own nearly 80 per cent of the land obtainable via ownership documents, while the bottom 20 per cent of owners have only 0.3 per cent of available land.
Thais in the top 10 per cent earned 39 per cent of overall income, while the bottom 10 per cent earned just 1.6 per cent of income, the NESDB found.
The poverty level in 2012 was said to have dropped from 13.2 per cent to 12.6 per cent of the total population in the previous year, but the number of poor people remains high at 15.6 million. This includes 8.4 million regarded as poorest of the poor.
A drop in the number of poor was seen to have been a result of more education provided to children in the poor families, plus government measures to lower living costs and increase incomes.
In terms of monetary assets, people who have less than Bt10 million in bank accounts represent 99.9 per cent of Thais, but they just over half of the country's wealth (53.5 per cent).
On the other side of the ledger, people with more than Bt10 million in bank accounts make up just 0.1 per cent of the population. But they own 46.5 per cent of national assets when assessed on overall value.
The 8.4 million people regarded as poorest have insufficient food and necessities, and therefore have the lowest survivable standard.

Poorest provinces
The 10 provinces where the poor live, listed from the most poor to the less poor, are: Mae Hong Son, Pattani, Narathiwat, Kalasin, Si Sa Ket, Tak, Nakhon Phanom, Sakhon Nakhon, Buri Ram and Mukdahan.
Mae Hong Son topped another sad ranking from 2000 to 2012 as it was the province with the greatest number of poor people, topping a list of eight provinces with chronic poverty. The seven other provinces were: Pattani, Narathiwat, Kalasin, Si Sa Ket, Tak, Buri Ram and Nakhon Phanom.
In terms of educational opportunity, 87.6 per cent of Thai children have attended primary schools, with 67.6 per cent going through lower secondary level, 55 per cent doing upper secondary schooling, and 28.5 per cent in the undergraduate level.
Children from the top 10-per cent (richest) have 16 times more educational opportunity than those from the poorest 10-per cent, the study found.

Richest 0.1%own half of nation's assets - The Nation

The high cost of stability 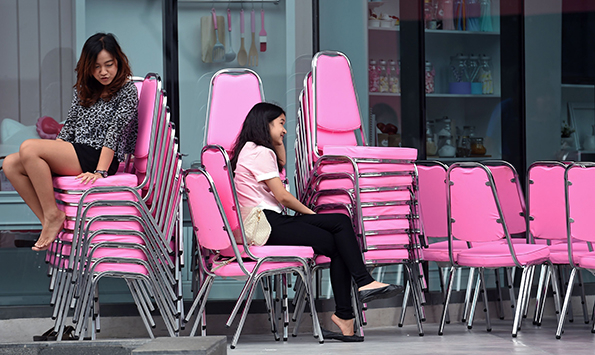 Thailand's economy: The high cost of stability | The Economist
W