Founder, CEO and Chairman of the Minor Group

One of the best-known expatriates in Southeast Asia, Bill Heinecke is the driving force behind the unparalleled successes of the stable of subsidiaries under the Minor Group umbrella. These companies add up to an impressive list of leading global brands across the lifestyle and leisure sectors with a proud heritage that is deeply rooted in Thailand. Minor Corporation manufactures and markets a portfolio of leading fashion, cosmetics and leisure brands, while Minor International currently operates 16 world-class hotels and resorts and more than 630 branded food service outlets across Asia and the Middle East.

A visionary, entrepreneurial spirit, an unshakable commitment to succeed, and a hands-on management style have formed the cornerstones of Bill Heinecke’s meteoric rise as an icon in the business world.

Born in 1949, William Ellwood Heinecke moved to Bangkok in 1963 with his family. Having previously been based in Japan, Hong Kong and Malaysia, the expatriate life was no novelty to them. His father served 25 years with the US military through two wars and later joined the foreign service, while his mother worked as an Asia correspondent for Time magazine. Bill became a student at the International School and, almost at once, began demonstrating the rare entrepreneurial skills that would become a hallmark of his remarkable career. Passionate about go-karting, he persuaded the editor of Bangkok World to let him write a column on the subject, his wish was granted but on condition that he secured advertisements to run alongside it.

Bill’s first venture proved so successful that, at the age of 17, he took over from the paper’s advertising manager while still attending school. By the time he graduated a year later, he launched Inter-Asian Enterprise to supply office cleaning services, and Inter-Asian Publicity – a radio advertising company – with around US$ 1,200 he had borrowed. The latter he later sold off to Ogilvy & Mather and, in 1967, founded Minor Holdings that would grow into The Minor Group over the next four decades, spanning more than 30 companies. Bill Heinecke was on his way, with an extraordinary series of triumphs and a few setbacks that he met philosophically: “Deals are like buses,” he was quoted as saying. “There will always be another one along the way.”

He married his high school sweetheart, Kathleen, in 1968 and they have two sons, David and John. A fine balance between family life and empire building saw him embark on his first hotel venture in 1978, the Royal Garden Resort in Pattaya. Though his endeavours have included advertising agencies and other hotels in Bangkok, Hua Hin, Phuket, Chiang Mai, Chiang Rai and beyond Thailand’s borders, he is probably best known as the man who successfully introduced American-style fast foods to Thailand in the late 70’s and 80’s – brands like Mister Donut, Pizza Hut, and Burger King.

In 1991, Bill Heinecke became a Thai citizen. Still actively involved in a day-to-day basis in the empire he founded – especially overseeing global expansion plans – he now makes time to enjoy hobbies like piloting his airplane, scuba diving or racing vintage cars. A two-time past president of the American Chamber of Commerce in Thailand, he sat on the Prime Minister’s Foreign Investment Advisory Council, and is also a keen supporter of the Thai Elephant Conservation Centre. He authored The Entrepreneur, which has subsequently seen several reprints and has been translated into a number of languages.
Zum Vergrößern anklicken....

In den 70ziger Jahren in Bkk!

[FONT=&quot]Third-generation head of storied conglomerate B. Grimm Group, Harald Link, plans to list the group's thriving power arm this year. Other interests of the $1 billion (revenues) group span construction, real estate, transportation and infrastructure. [/FONT][FONT=&quot]Founded in 1878 as Siam Dispensary, it was acquired by Link's grandfather Adolf Link in 1914.

After studying in Switzerland and Germany, where he grew up, Harald Link arrived in Bangkok in 1978 to join his uncle in the family firm. Taking charge as chief executive in 1987, he's grooming daughter Caroline to succeed him. Avid polo player, he frequently flies economy.[/FONT]
Zum Vergrößern anklicken....

B.Grimm owns and operates 20+ power plants in Thailand, 4 in Laos and 1 in Vietnam, through its subsidiary Amata Power. Amata Power is a joint-venture between Amata and the Sumitomo Corporation, with the majority stake owned by B.Grimm. It builds and operates power plants in Thailand, Laos and Vietnam, providing electricity and steam for national power grids as well as nearly 200 large manufacturers. Of these industrial parks, the Amata City Industrial Estate received the prize for "Best distributed generation project" in 2015.[SUP][4][/SUP]
85% of B.Grimm's production capacity is gas powered combined cycle cogeneration plants. However, B.Grimm has expanded their renewable generation (Wind, Solar, Hydro) and are on track to double capacity within the next few years.[SUP][5][/SUP] Another five power plants in Thailand are under development, as well as four renewable plants abroad.[SUP][1][/SUP]

B.Grimm distributes air-conditioners through a joint venture and licensing arrangements with US-based Carrier Corporation. The company also provides parts for air-conditioning and refrigeration units through a joint venture with Beijer of Sweden, Beijer B.Grimm (Thailand).[SUP][7][/SUP] B.Grimm also manufactures Carrier commercial and light-commercial air-conditioning systems at its B.Grimm Airconditioning factory.
Other partnerships include Siemens Limited, a world leader in Electrical Engineering; Hamon, a market leader in cooling towers for power plants; KSB Pumps, which provide pumps for the energy-related industry and B.Grimm Trading Corporation supplying energy equipment to industries and buildings.
Hamon B.Grimm Co., Ltd. is a joint venture with Hamon Group of Belgium, the world leaders in the manufacturing of large cooling towers in power generation and the petrochemical industry. The company, in operation since 1993, is engaged in local subcontract fabrication of parts for and installation of cooling towers and as such operates in synergy with B.Grimm for the marketing and distribution for large industrial and infra-structural equipment.[SUP][8][/SUP]

The company is a major distributor of foreign healthcare devices through formal partnerships with Merck, Maquet, Getinge, Siemens and Carl Zeiss.[SUP][9][/SUP][SUP][10][/SUP]
Real estate[edit]

B.Grimm has developed two high rise office buildings: the Alma Link Building, located in the central business district, and the Dr. Gerhard Link building, located in eastern Bangkok near Suvarnabhumi Airport. The company has begun the development of a 600-acre real estate project in Pattaya.
Internet[edit]

Bangkok's Airport Rail Link was built in 2005 by a consortium of B.Grimm, STENCON, and Siemens. The line connects Bangkok's Suvarnabhumi Airport to the city center. It is operated by SRTET (SRT Electric Train Company), a wholly owned subsidiary of the State Railway of Thailand (SRT). The cost of the project was 25.9 billion baht.[SUP][12][/SUP]
Logo[edit]

B.Grimm's logo comes from the Phra Prang of the Temple of Dawn. A prang is a Buddhist tower-like spire, usually richly carved, that were especially symbolic during Thailand's Ayutthaya Kingdom (1350–1767) and Rattanakosin Kingdom (1782-1932). Phra Prang was selected as the company’s logo due to the location of the first B.Grimm & Co. by the Chao Phraya River overlooking the Phra Prang of the Temple of Dawn.[SUP][13][/SUP] 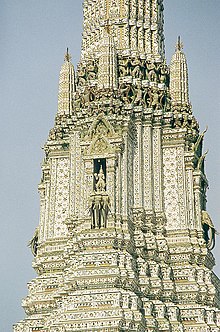 B.Grimm was founded in 1878 when German pharmacist Bernhard Grimm and his Austrian partner, Erwin Mueller, started a chemist's shop, the Siam Dispensary, on the Oriental Avenue off New Road.[SUP][14][/SUP] The shop, one of the earliest incorporated businesses in the country, prospered and it was soon appointed official pharmacist to the Thai royal family.

Siam Dispensary​
As early as 1900, the company had secured partnership with global heavyweights like Siemens Corporation.[SUP][15][/SUP] In 1903, Adolf Link was hired as a manager to help expand the growing business. After King Chulalongkorn returned from his grand tour in Europe, he began putting in place measures to modernize the country to bring it more in line with European nations.[SUP][16][/SUP]
Following the outbreak of World War I, Link, as a German national, had all his assets seized on orders of the British government and was sent with his wife, Erma, and two children, Herbert and Gerhard, to concentration camps in India.
The Links had much credibility in Thailand and they knew the Thais hadn’t taken away their assets on their own initiative. They returned to Thailand after the war ended in 1920. In 1928, HRH Prince Bhanurangrsi built on his property the new premises for the company at Wang Burapha and Their Majesties King Prajadhipok and Queen Rambhai Barnipresided over the opening of the new offices.[SUP][16][/SUP]
Herbert Link reopened the company in Thailand in 1949, while brother and partner Gerhard remained in Germany to help expand the B.Grimm name in Europe. In 1953, Gerhard Link was also appointed Thailand's honorary consul and later its consul general in Hamburg.
Over the next decade, the brothers expanded the business so that by 1964 it included engineering and equipment for healthcare, power generation, telecommunications, air conditioning and mechanical engineering.[SUP][16][/SUP]
The company’s new office and warehouse on New Petchaburi Road was opened by HRH the Princess Mother in January 1967. In 1975, Herbert’s wife, Alma, was bestowed the title of Khunying by HM the King in recognition of her tireless work for various charitable foundations. She was the first foreign woman to receive such an honor in Thailand.[SUP][17][/SUP]
In 1988, Dr Gerhard Link’s son Harald Link expanded B.Grimm into power generation, manufacturing and real estate, and also forged joint ventures with some of the world’s largest corporations.
Harald Link, who had been raised in Germany and had graduated from University of St. Gallen business school, had joined his uncle Herbert in Thailand in 1978 to help manage the growing business. He moved to Thailand with his wife, Princess Assunta of Liechtenstein, descendant of Prince Aloys of Liechtenstein.
In 1992, the company built new factories and work also began on another new head office. Soon afterwards, B.Grimm expanded into power generation, bio-diesel production and the lifestyle industry. The company has since rapidly expanded into power generation which now accounts for 70% of total revenues.[SUP][1][/SUP]
Forbes recently reported that Harald Link’s daughter, Caroline Link, is being trained to play a key part in the business.[SUP][16][/SUP] She recently was named as one of "12 women to watch" by Forbes.[SUP][18][/SUP]

The magazine also listed 12 "women to watch" who could make the list next year. That dozen included Caroline Link, president of the B. Grimm real estate giant.
...
Before making the Top 50, Ms Sunee and Ms Wandee showed up on Forbes' "Women to Watch" list, which this year features Ms Link. Just 33 years old, she has worked in B. Grimm's energy, cooling systems, healthcare and real estate divisions, learning the business from the ground up with an eye on eventually succeeding her father, Harald, the group's chairman.
Zum Vergrößern anklicken....