A bomb has exploded close to a shrine in the centre of the Thai capital, Bangkok, police say.

Local reports suggest at least 12 people have died and at least 20 more have been injured.

The BBC's Jonathan Head, who is at the scene, says there is a huge amount of chaos, with body parts scattered everywhere.
The attack took place close to the Erawan Shrine in the capital's central Chidlom district.
The explosion occurred at about 19:00 local time (12:00 GMT), with police saying it may have been caused by a motorcycle bomb.

Our correspondent says this a very well known shrine in the centre of Bangkok, next to a five-star hotel. 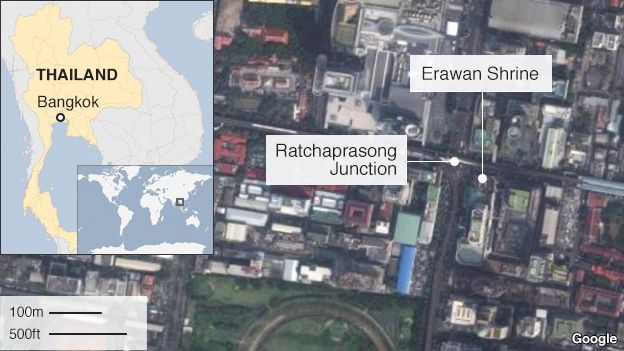 He says people around the shrine were hit by the full force of the blast.

There are burnt motorbikes on the main road, with paramedics and police trying to take the injured away, he says.
The shrine is to the Hindu god Brahma but is also visited by thousands of Buddhists each day.
National police spokesman Lt Gen Prawut Thavornsiri told Agence France-Presse news agency:

"I can confirm it was a bomb, we can't tell which kind yet, we are checking."

The explosion was on the Ratchaprasong intersection, which has been the centre of political demonstrations in recent years.

Our correspondent says bomb attacks in Bangkok are extremely rare.

Are you in Bangkok? Did you witness what happened?
Emailhaveyoursay@bbc.co.uk with your story and images but please stay safe.
Please include a contact number if you are willing to speak to a BBC journalist.
You can also contact us in the following ways: